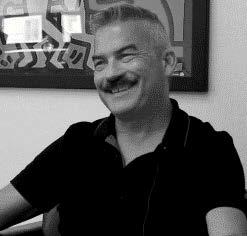 As the Property Manager for the Town Hall Apartments I am responsible to meet the housing needs of my 79 residents, as well as insuring the building remains in good condition. Serendipity definitely brought me to Heartland and specifically to manager Town Hall. I came out of the closet in 2016, returned to Chicago and was given the job of managing a building that is occupied by at least 55 LGBTQ+ seniors. It's truly the best group of residents and best building I've managed in my 30 years in the industry. Everyday I learn from my residents what they have had to endure to bring me the rights I have today.

"So on a personal level, I think, you know, the first part of it was so surreal, like the idea of just even self quarantining on my own and feeling very isolated. And also Chicago became like a ghost town. You're dealing with five million people here in just the city of Chicago, and you rarely see a car on the street. You rarely see anybody on the sidewalks at the parks. I continued to go into the office three days a week and I was often the only person on my EL car, my train car. So I took a lot of pictures of just me there. And that was surreal. So you saw the city shut down.

And that's also a very controversial program because there's constant protests against Heartland for providing that service to unaccompanied children. They feel like we are in bed with the Trump administration, which is the farthest from the truth. We can never be, we offered to take them. And it is using the funding of the relocation, the refugee and relocation money that's available. And we, the average time a child stays in those homes is 30 days because we reunite them either with family that already exists here in the States or a foster family. And then they are moved out of those areas. If we did not conduct this program, more children would be in cages at Texas border. And that's basically where the other unaccompanied children have been placed and have been put in cages, literally. "